I love Puys…. no not peas….Puys. Although I do love peas too. I’m referring to Puy lentils; they’re a favourite of mine for all sorts of reasons, but especially because of their robustness, and their rich, deep, muddy slate/green colour. It’s a colour that works at every level for me- give me clothes, plants, paint, foods, notebooks, crockery, or just about anything that is the dreamy colour of Puy lentils, and I will be more than pleased. I don’t wear eyeshadow, but bizarrely I’m always happy to spend time browsing the beautiful colours at makeup counters, and the colour I’m always drawn to is….you guessed, the muddy green that is Puy. In fact, that’s such a great name for an eyeshadow, don’t you think? Lentilles du Puy grow in the Puy region of Central France, and acquire their earthy and peppery taste from the rich, volcanic soil there. They are considered to be a superior lentil because of their unique taste, but also because they hold their shape, rather than becoming a bit mushy, during cooking. 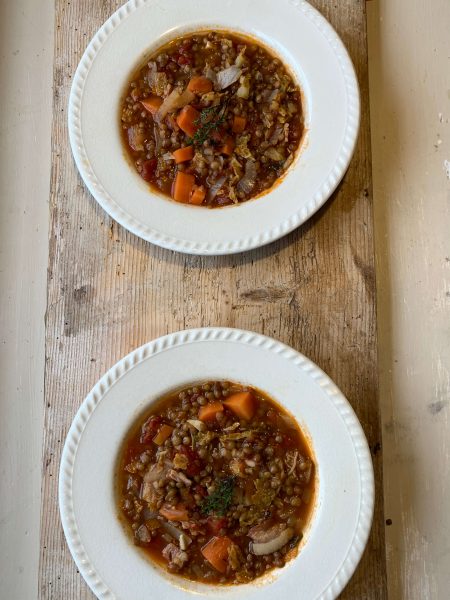 They are very well suited to winter meals, when we crave something grounding, earthy and robust, and I think they are also a fabulous substitute for meat for this very reason. I won’t go on about their nutritional value, because whilst this is incredibly high, all pulses are brimming with nutrients. As long as we include them in our diet on a regular basis, we will benefit from so much goodness, and sometimes that’s all we need to know. Also, variety is the key to a happy life, so mix and match which lentils you regularly cook with, as they’re all equally wholesome, but Puy lentils should definitely feature. This recipe is a great one to cook as an alternative to my exotic red lentil soup. I would say that if I had a choice, I would cook the red lentil one during spring, when there is often still a chill in the air, but warmth is coming, or early autumn, when summer is still in our bones, but the chillier days are knocking on the door. During these times of the year, we don’t need such a filling, hearty meal, but on cold, early to mid-winter days, a big bowl of hearty Puy lentil soup will satisfy, nourish, and seal in the warmth.

A large handful of shredded savoy cabbage or kale.

A 400g tin of chopped tomatoes

1 litre of chicken or vegetable stock

A small handful of chopped parsley to serve

Dry fry the bacon in a medium-sized casserole pan until it is brown. Now add the oil, onions, garlic, carrots, cabbage/kale and gently sauté for about 5 minutes until the vegetables have softened but not browned. I add smoked paprika at this point in the process too, if I am not using bacon. However, If I am, I leave it out. Somehow, I think the paprika is a good earthy, smokey substitute for the bacon, for those of us who don’t eat it. Now add the lentils, tomatoes, stock, thyme, and the seasoning, and give it a good stir. Put the lid partially on, bring to a gentle boil and turn the heat down to a simmer. Cook for around 40 minutes until the lentils and vegetables have merged together.

I throw in the parsley to serve and have some fresh pesto sauce ready on the table. I love to add a teaspoon of it and swirl it through the soup. You can have some good bread with it if you wish, but it’s certainly filling and hearty enough on its own.