Who would believe that not so long ago in the UK, certain foods were considered ‘exotic’ and not part for British fare? The arrival of immigrants from all corners of the world from the 1950s onwards, meant that foods such as pasta, lentils, noodles and rice became popular, and began to be used in cooking, both at home and in restaurants. In the past few years, the UK has become one of the most exciting culinary corners of the world, and virtually all kinds of vegetables, fruits, pulses, and cereals can be readily found. 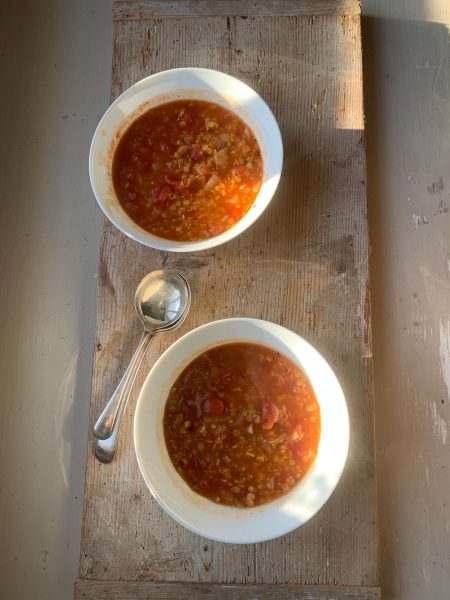 I was given this recipe by friends many years ago, but I forgot about it until more recently. I have made it countless times in the past couple of years, both for my family and for guests as a ‘welcome’ lunch when they visit for the weekend. I love the fact that it uses ‘dal’, or lentils, which I have eaten in abundance all my life, and consider to be thoroughly Indian. Yet it is, in my eyes, very much an English recipe, especially with the marmite addition. In fact, the cookbook my friends originally found it in is one of those old fashioned, black and white/no photos types of English cookbooks found in many a kitchen, two or three decades ago. These books always referred to ingredients such as lentils as ‘exotic’! I always found this idea quite amusing, as lentils were staple foods in my house, and certainly nothing out of the ordinary. I love the Indian/English cultural and culinary mix that is evoked for me with this red lentil soup; it always comforts me, as it defines my hybrid cultural identity perfectly.

It really is as easy as pie to put this soup together; with little effort and skill, you can create a dish that will delight anyone’s taste buds. I have added extra ingredients-the chillies, garlic, and the parmesan cheese, because they give it a greater depth, and bring even more exoticism to the soup.

Half a teaspoon dried thyme

Half a teaspoon marmite

Saute the onion in the oil for a few minutes until soft, before adding the garlic. After a couple of minutes, simply add all the other ingredients, except the parmesan, and mix well. Cook for around half an hour on a medium heat, and adjust seasoning. You might also need to add a little more stock if it looks too thick when it’s cooking.

Serve in warmed bowls, grate some fresh parmesan cheese on top, and revel in the exotic goodness of every mouthful.