Ever since I was a young girl, my mother has made this moreish light lunch/snack using good old British crumpets. One of many nods to the blending of British and Indian culture, crumpets probably appealed to my parents and their fellow settlers as an easy, satisfying food, but they also possibly felt they were a little bland for their palates, which were used to an array of exotic flavours.

So, my mother, whose obsession with cooking, and skill at creating delicious, inspired recipes based on instinct, is a thing to behold, concocted these Indian-style spiced crumpets that most of her friends loved, and ended up adding to their culinary repertoire too. This dish is perfect for breakfast, lunch, or as a light evening meal, but also works really well as a picnic snack. I love to make spiced crumpets for breakfast at the weekend, accompanied with a mug of hot masala chai during the winter, or on cold, grey-sky days. Comfort food at its best! 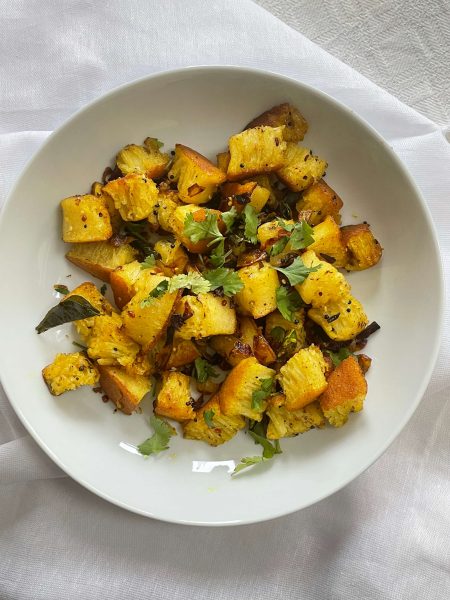 The humble crumpet’s origins date back to the Anglo Saxon era, and Wales. I love to know details like this about food, and am of the belief that simple food can stand the test of time, but also can be adapted to suit people’s tastes. This crumpet recipe will delight those who love the texture and taste of this British staple, but want to mix it up a bit. There’s nothing wrong with a toasted crumpet spread with a little butter, but this Indian version is so worth a try!

Ingredients to serve 2-4 as a light snack:

A packet of 6 crumpets, cut into bite -sized pieces

Heat the oil in a wok or frying pan, and once hot, add the mustard seeds. Once they fizzle, add the urad dal. Let it cook until it is browned, before adding the curry leaves, chilli and ginger. Mix well before adding the onions and sesame seeds, and cook on a low heat until the onions are golden brown. Now add the ground spices, mix well and throw in the crumpets and yoghurt, as well as salt to taste. Give it a good stir, put a lid on the pan and cook slowly for 5-7 minutes., stirring from time to time.

Serve hot, garnished with the coriander leaves and dessicated coconut.