Shrikhand is a wonderfully flavoursome and simple home made yoghurt dessert that is hugely popular in the Indian states of Gujarat and Maharashtra. It is cooked mainly for occasions such as dinner parties or celebrations, rather than as an everyday food. As I have mentioned before, desserts are not generally part of the ritual of home cuisine in India, but are certainly enjoyed as part of festivities and happy occasions. 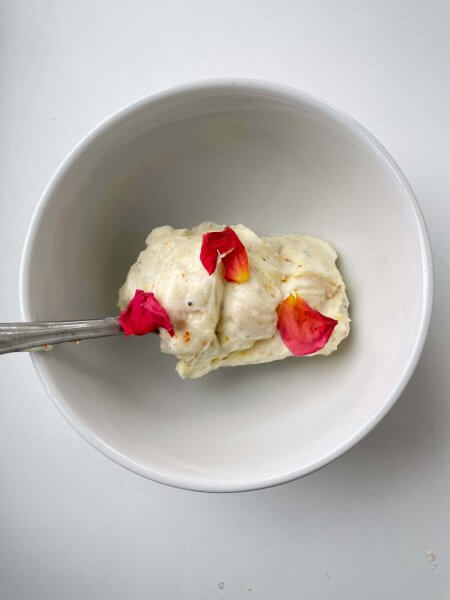 It is made in a matter of minutes, apart from the first stage, which involves hanging the yoghurt in a muslin cloth which is tied to the kitchen tap over a bowl overnight. Shrikhand contains very little sugar; in fact it is best made slightly tangy rather than overly sweet, which allows the flavour of the yoghurt and the other ingredients to shine. The consistency is thick and indulgent, rather like a cheesecake filling, so you only need a few mouthfuls to satisfy and delight the taste buds after a meal. Make sure you use fresh, organic whole milk yoghurt, which will not only give the shrikhand a fantastic rich taste, but it will also replenish your hugely important gut microbiome. Food is medicine, after all.

1 tsp each of slivered almonds and pistachios to garnish

Put a sieve over a bowl and line it with a large square of muslin. Now put the yoghurt in the muslin, lift the four corners up, and tie it onto the kitchen tap with the bowl below it to catch the whey. Leave it overnight; in the morning the yoghurt will be hard and compact. Remove it from the muslin cloth and put it in a mixing bowl. Now add the sugar, and beat very thoroughly with a wooden spoon until it is silky smooth. This might take a good ten minutes, so don’t be impatient, as it’s important to get the consistency right. Now add the saffron with its milk, and the chopped nuts, and mix them evenly into the yoghurt. It’s now shrikhand! Put it in a pretty serving bowl, and garnish with the slivered nuts. Store in the fridge, but remove half an hour before serving. I, of course like to also add a few rose petals on top to serve, because an exotic dessert can never have too many exotic components.

Shrikhand will keep well in the fridge for around a week.