My newly acquired love of baking madeleines as a culinary gift for friends and family is the perfect reason to give you the recipe for another version of them. The coconut and lime versions I normally make are admittedly as scrumptious as can be, but I had a desire to experiment, as I usually do with all my cooking and baking, and so I used a friend’s birthday meal as an excuse to try this version. Orange and almond go hand in hand, and there is something about the dense, creamy texture of ground almonds that lends a special decadence to baking, that never fails to impress. And I do love orange- I use freshly squeezed orange juice and orange zest quite often in my cooking… it’s great added towards the end of cooking sauteed greens, or in a stir fry, for instance. It’s also a much more subtle flavour than lemon, so it’s a good substitute, and it has a really sunny, warm flavour. 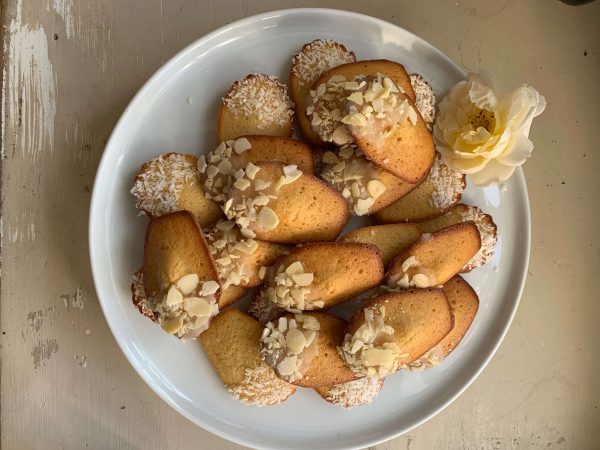 I was a little worried about how my new version would turn out; after all, the finale of a friend’s birthday meal rested on how tasty the dessert course would be, and so I made 12 of my normal coconut and lime madeleines ,which I know are guaranteed to delight, as well as lots of these orange and almond ones, which thankfully turned out to be really rather delightful too.

I was so pleased with the flavour, and both versions meant that guests had choice, which we all like. The new madeleines sat perfectly patiently with the coconut and lime ones on the plate, not begging, but modestly inviting people to choose them…. but they didn’t wait long, because of course, options need to be tried, comparisons need to be made, and so everyone tried both flavours, and some tried them again too, just to be sure!

Here’s the recipe. You could, of course, make both versions together, as I did, and furnish your friends or family with choice!

Finely grated zest and juice of 1/2 a medium orange

100g plain flour, plus extra for the moulds

A handful of toasted flaked almonds

100g unsalted butter, melted and cooled, plus extra for the moulds

Juice of the other half of the orange (you might need less than this, so go slowly)

Put the eggs and sugars in a large bowl and, using an electric hand whisk, mix until fluffy. Add the rest of the ingredients and whisk again or mix well with a wooden spoon. You should have a thick batter. If it is too thick, add a splash of milk. Leave to rest for 20 minutes. In the meantime heat the oven to 170C fan or 190C non-fan. Brush the moulds of the madeleine tin with a little melted butter, and coat with a very light sprinkling of plain flour (I put a teaspoon of flour in a tea strainer and tap it gently over each mould, adding a little more flour as required).

Spoon the batter into the 12 moulds. You will need to bake them in 2 batches. Place the first batch in the oven for 10-12 minutes until they are golden brown. When slightly cooled, remove onto a cooling rack.

While the second batch is cooking (there will be enough batter for around 4-6 more cakes) place the sugar and orange juice in a small saucepan over a low heat. Let it bubble for a couple of minutes or more until it becomes a syrup. Remove from the heat.

Once all the madeleines are cooked and slightly cooled on the rack, brush the rounded ends with some of the syrup, and press some flaked almonds on top.

The madeleines should keep for around a week in an airtight container, but are best enjoyed on the day they’re baked.