In Gujarati cuisine, there is a wonderfully satisfying and moreish recipe for stuffed aubergines. The stuffing is made from gram (chana dal) flour, spices, peanuts and dessicated coconut, and it has an utterly delicious, unique taste. I remember eating it every so often as a child, as my mother would make it mainly for the regular get togethers with our family of friends, and I have the warm, comforting memory of both the taste, and the excitement of being with our extended Yorkshire Indian ‘family’, imprinted on my psyche. The combination of wholesome food, and the feeling of belonging is one that resonates with me to this day. 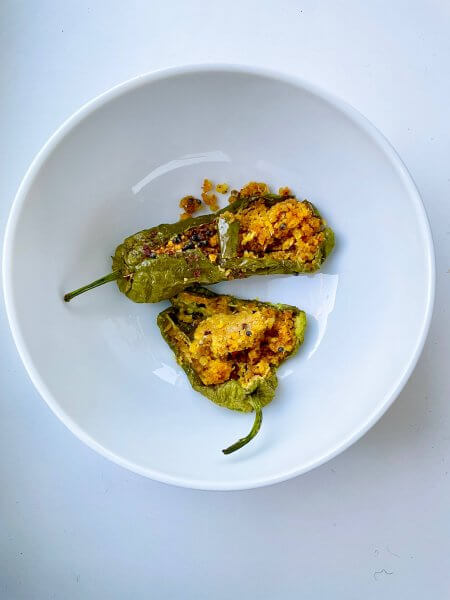 I have now made this recipe for the first time with my mother, but instead of using aubergines, we used Spanish Padron peppers, which I love. When I stay with my mother for a few days at a time, we like nothing more than experimenting with, and adapting recipes. She was told about Padron peppers by a friend, but couldn’t work out what they were. Her friend had bought some a few times and made different meals with them, but couldn’t recall their name. Finally, she suggested I might know them, and she sent me a photograph… it turned out they were delicious ‘pimientos de Padron’. These gorgeous, pan- fried Spanish delicacies are a hugely popular tapas food, served whole, with nothing more than a sprinkling of salt. They are mild in taste, but every so often one will catch you out and taste incredibly fiery! It works really well using them to make this dish, and I’m all for mixing international cuisines….they look so pretty too. These make a great starter as part of an Indian meal, but as with all Indian cuisine, which doesn’t have sequential courses, they can also form part of a main meal, and sit alongside other dishes quite happily. Make sure you don’t stuff them more than half full, so the stuffing cooks well. Also, don’t leave out the ‘vaghar’, which is essential to Gujarati cuisine, and adds a deep, ‘finished’ taste to food. 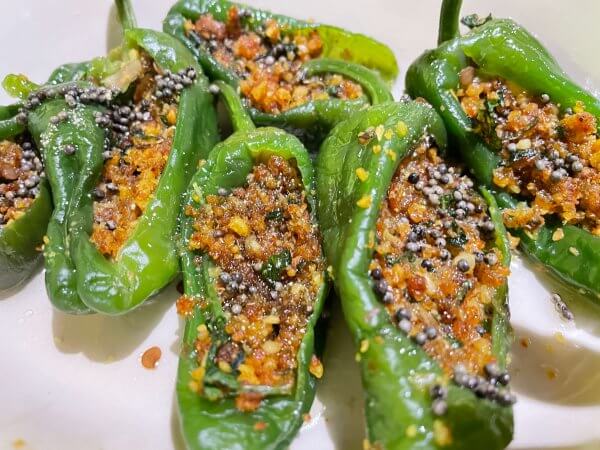 Ingredients to serve four as a starter:

12 padron peppers, slit lengthways for stuffing, and seeds removed (use a small teaspoon to do this, as you don’t want to risk tearing the base of the peppers)

For the vaghar (tempered spices)

Dry roast the flour with a few drops of oil in a frying pan, stirring it around continuously, until you begin to detect its aroma. It should take a matter of a few minutes.

Transfer to a mixing bowl and add the coconut and peanuts, and mix all three together. Now add the rest of the ingredients and mix thoroughly with a spoon. Once it starts to come together, use your fingers to better mix it all, and to remove any lumps that might form. The finished mixture will have a fine, crumbly texture. Set aside, and preheat the oven on 180c/350f.

Now smear a little oil in the bottom of a small ovenproof dish that will hold all the peppers in one layer. Add 2-3 tbsp of water and place the peppers in. Now lift one pepper up at a time and stuff it half full with the mixture. Keeping it above the dish means any spillages can be picked up and put in too. I use a teaspoon to fill the peppers, and then pat the stuffing down gently using my fingers, ensuring it fills the cavity snugly. Keep the teaspoon to hand for the vaghar.

Now heat the oil in a very small frying pan until quite hot, and throw in the mustard seeds. Wait until they are popping and you smell their aroma, before removing from the heat. Using your teaspoon, carefully pour a little vaghar over each vegetable, slightly spreading it evenly over the stuffing with the back of the spoon.

Cook for around 20 minutes until piping hot.

Serve around 3 per person as a starter.

Buen apetito, as the Spanish would say.