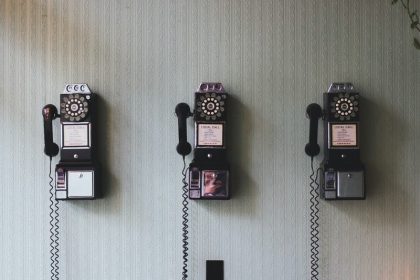 How many times have you said that so far in 2017? Was it said from the heart or was it said automatically because that is what one ought to say in the first month of a new calendar year? How many of us have said things that we either did not mean or did not mean to say?

I am fascinated by the art (and it is an art) of communication and how it shapes our actions and behaviour patterns. In all areas of life, communication should not be quantitative, but rather qualitative. In other words, it is not how much we speak to others, but the quality and sincerity with which we speak. In our modern, fast paced and disposable society, we often lose sight of the impact of our words, or lack of them, on others. Unfortunately, this can lead to all kinds of problems and misunderstandings.

The importance of communication

Communication begins from the moment we arrive in the world and is initially taught by our mothers. It is a mixture of soothing, reassuring words and gestures, carefully imparted and quickly absorbed into our core being. Breast feeding is the first form of communication we experience that is both essential and primordial, providing us with valuable nutrients without which we would wither away, and the knowledge that we are loved unconditionally by someone who has nothing to gain from this selfless act. The connectedness between mother and child through the act of feeding replaces the umbilical link that ceases once we are born. If we stop and reflect on communication, and look at statistical evidence of people who develop mental health issues or severe depression, we find most of these problems begin prior to age 18. The issues are often linked to a lack of family stability or to parental absence or indeed to lack of communicated love.

It starts from childhood

Research shows that those people who were given unconditional love and acceptance during childhood are better able to cope with adversity in later life. When these initial emotions are left uncommunicated, we are left feeling unrooted and vulnerable.
We have all seen footage of orphanages where babies and small children are left in their cots for hours on end and never held. This devastatingly cruel twist in their fate leads them to being subjected to chronic stress and thus psychologically damaged almost beyond repair. Had they been held, stroked, talked to, smiled at, loved, or at least been offered loving gestures by those who were supposedly taking care of them, then their future may have been a little brighter, and more stable.

The kindness of strangers

Talking to strangers is seen as….well, strange. Certainly in the UK, the culture of keeping oneself to oneself in public places means that the palpable silence on public transport creates a collective feeling of disconnectedness. Wouldn’t it be better if we exchanged a few words, or at least made eye contact with one another? A smile, a comment about the weather or how crowded the train or bus is would go a long way toward increasing gross domestic happiness. There is a definite culture of pseudo communication now, since the advent of the internet and social media. Sadly, my feeling is that while there have been many benefits of being able to connect via mobile phones and emails, the truth is that we need more, not less face to face communication to feed our souls. We are incredibly social beings and although it is great to be able to ‘get hold’ of one another via our phones in an instant, or during an emergency, there is no substitute for a hello or goodbye hug, a real ‘getting hold’ of one another and spreading the love.

There are many people who find it difficult to communicate with ease face to face. They cannot look others in the eye or instigate a conversation. Often these are the people who lean on technology to provide them with a feeling that they are communicating and connecting with others. Facebook, for instance, can allow us to create friends and interest in others’ lives that is seen as relationship- building. It makes us feel that those we have befriended online know us. Not so! Many teenagers who suffer from depression attribute their symptoms to the pressures created by social media to create virtual lives that are seemingly perfect. They watch others on social media platforms and compare what they see in image form with the truth of their own lives, which leads to a huge sense of not being good enough.

When I was a teenager, there were local discos and youth clubs where one could spend time hanging out with friends, having conversations and slowly getting to know the people we are socialising with. Youth clubs have all but disappeared, discos conjure up nostalgic images of a white -suited John Travolta in ‘Saturday Night Fever’- now slightly dated, I agree, but how lovely. Discos were actually just extensions of youth clubs, with a bit of dancing thrown in, and the beauty of spending time with friends was that real conversation was the only choice, due to the absence of mobile phones. Ironically, mobile phones can actually hinder conversation, allowing us to switch off from our immediate surroundings and appear ‘unavailable for comment’, heads bent downwards facing the screen. In the era of pre-mobile phones, even heated arguments outside the youth club were real; they connected us to one another, and they didn’t end with a convenient text message telling the supposed wrong party what we thought of them. They were, for they had to be, sorted out face to face.

If we look at any area of society, the key to success and equilibrium is communication. When there is a lack thereof, things tend to go awry. We talk of talks breaking down, on- going, drawn out negotiations between two parties (how much can there be to say?), communication breakdown leading to divorce. We have political parties writing endless reports, often taking years to complete before new policies can be created or decisions made. We seem to have a need to over-intellectualise all areas of our societal makeup, when very often what would shift things in a speedier and more positive way, is a good, honest conversation. When we communicate from our hearts and with the right intention rather than to provoke or to hide our truth, we allow others to see and understand us. We show our confidence in exposing who we truly are rather than the version of ourselves we want people to see. Most arguments are caused by confused communication and retaliation which is designed to protect our fragile egos. We accuse, abuse, we become defensive, and we confuse. We often do not say what we are really feeling during an argument, because we all have a well-developed self- protection mechanism that refuses to reveal the fear and vulnerability we are feeling. How exhausting! We need to accept that every one of us is vulnerable, fragile and fearful. We somehow carry ancestrally, the need to self -protect in order to survive. Darwin’s theory of survival of the fittest seems to echo in our subconscious and leads us to surround ourselves with hard armour.

Ayurvedic medicine offers fantastic insight into communication. In Ayurvedic teaching, it is said that we all need healing and this can only come about by bringing awareness to our emotions and feelings. We have to take full responsibility for our own healing rather than holding others responsible for our misery. In other words, the pain we feel is within us, it is part of us, our creation, and not caused by others. Once we can learn to accept this, we can begin to communicate better and share our true selves with those both in our lives and on the periphery. In my work I often speak to clients who book an appointment for a particular health issue, but I soon realise during the consultation that the real issue is entirely different. I understand that it can be difficult to share deep and often personal feelings about one’s physical or mental health, and so I allow them the space to feel comfortable enough to open up. It is my duty to communicate clearly to them that I am on their side and that I can only truly help them if they speak as frankly as possible. In business and in our personal lives, the best outcomes happen when clear communication from both sides occurs.

Happy New Year again, and I mean that sincerely.