Many Indian foods are typical to a particular region of India. This means that somehow, psychologically, they taste better when eaten either in the region, or when they are cooked by someone who hails from it. This is similar in other countries such as England where, for example, Cornish pasties somehow taste best eaten in Cornwall. Batata poha is one such dish; typical to my parents’ home state of Gujarat in north west India, it’s a dish that I have been eating all my life, cooked by my mother, albeit in Yorkshire, not India. However, some of our ‘Yorkshire Indian family’ with whom I grew up, are not Gujarati, and so they used to insist on my mother making it for them whenever they came over at weekends- they felt their own mothers would not give it the authentic Gujarati touch! Similarly, my various aunties have their signature dishes that only taste right if they are cooked by them. Batata poha is a dish that is so moreish and filling in the sense that it satisfies, but doesn’t leave one feeling too full. It’s a great meal, or ‘snack’ as most Gujaratis see it, to prepare for lunch, or a light evening meal, because if you’re not too hungry, but fancy a little something to satisfy the taste buds, you can serve yourself as much or as little as you want, and it does the job! 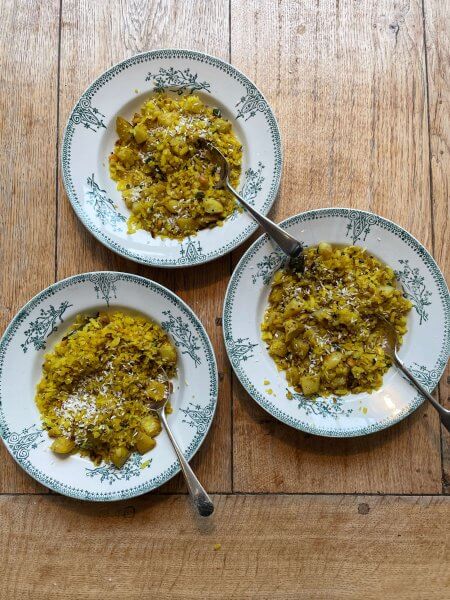 Rice flakes are easily found in Asian food shops, so it’s worth buying a small bag to keep in stock for this dish. Measurements are not often used by the older Indian generation of cooks such as my mother and my aunts. I too embraced this instinctive way of cooking at a young age, so why not adopt this mindset too, and play around with amounts, until you feel confident your meals taste the way you want them to? As an example, this recipe says one handful of rice flakes per person-that’s how my mother measures them, but obviously ‘a handful’ is different for each of us. Don’t worry about it the first time you try this; be bold, and see how it turns out. There’s always a next time to make adjustments.

A handful of medium rice flakes per person

Fifteen minutes before you start cooking, put the rice flakes in a sieve and wash under a cold tap two to three times, and put them over a pan to drain well. Keep them aside. Next, steam the potatoes for 5 minutes, drain the steam water, and with the lid off, allow them to cool. After the fifteen minutes are up, heat the oil in a wok until hot; with the heat on medium, add the mustard seeds and asafoetida, followed by the chilli and ginger, and the nuts, if using. Mix well for a couple of minutes, and then throw in the onions. Cook them until they are light golden in colour before adding the turmeric, cumin and coriander powders, followed by the potatoes and salt. Stir well and put a lid on the wok, turn the heat down to low, and cook for around 5 minutes. Add a small amount of water if it looks dry and needs it; next add the rice flakes, thoroughly mix them in with the rest of the ingredients, and add the sugar and lemon juice. Again, leave on a low heat with a lid on for another 5-7 minutes, or until everything is soft and cooked through. Adjust salt, sugar and lemon juice (it’s entirely up to you how you want to do this, but you are looking for a delicate balance of all three).

Garnish with the coconut and the coriander leaves, and serve piping hot.