Ahmedabad in Gujarat, North West India, is known for its historic cotton production, which until the 1960s was a thriving and hugely profitable industry, manufacturing and exporting high grade cotton all around the world. Cotton mills populated the city, and employed, during the peak production period, a tenth of the labour force of the city. It was actually known as the ‘Manchester of India”. Unesco has now declared Ahmedabad a world heritage site, which is quite something. This is the city where my parents grew up, both living in different ‘pols’ in the old city.

Pol is a word derived from the Sanskrit word ‘pratoli’, which means entrance to an enclosed area. Pols are fascinating clusters of streets where people lived according to religion, culture or profession. The houses, dating back to the 1700s, are narrow, solid stone structures with indoor courtyards, beautiful painted shutters, and heavy, ornate wooden doors.

On my recent trip to Ahmedabad, I took a heritage walk around some of the first pols that were built. The wonderfully knowledgeable guide escorted us around a network of narrow streets, where, depending on cultural or trading influence, the architecture differs slightly, but nonetheless all clusters have several things in common. 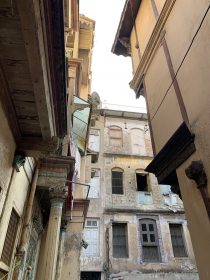 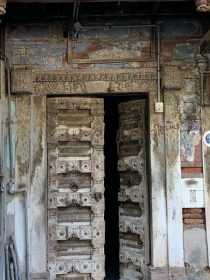 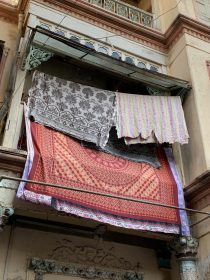 Life in the pols

I was fascinated to learn of the sophistication of the sewage system, the incredible foresight of the builders in terms of construction techniques, and the deep wells that held water enough to serve everyone in each cluster. There are several stunning temples, a couple of mosques, and communal courtyards where people could meet and chat together. Children were looked after by family or neighbours (who became like family), food was often shared, and there was a huge sense of belonging. Even the pigeons had their own colourful ‘chabutros’, or bird feeders, like the one in the middle picture below, as there was a lack of trees, and therefore food for them, in the pols. All residents, humans or otherwise, were treated the same. Elders were highly revered for their wisdom. In fact, many front doors have carved plaster figures of older ladies holding books. The message is that one is never too old to learn.

As our guide was keen to point out, nobody was in any danger of becoming depressed here. There are even notice boards to inform residents of any daily news and events. Some buildings were purely residential, whereas others housed businesses on the ground floor, and living quarters further up. As we walked slowly through the now quiet streets, one could clearly sense the hustle and bustle of times gone by. Back in the day, people lived cheek by jowl in harmony; Hindus, Muslims, Christians, and Jews all had their own pols, but mingled in each others’ streets happily, exchanging gossip or news about each others’ lives and businesses. There were particular areas for similar types of businesses, so one could go to the book shop area, the jewellery shop area, or the groceries area. 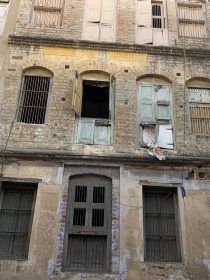 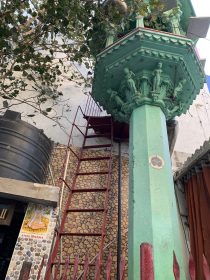 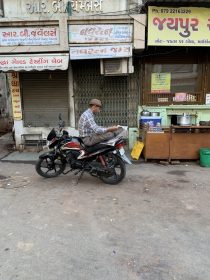 When my mother was pregnant with me, and my brother was a tiny baby, she took a trip back to India from England to attend her sister’s wedding. My father told her it would be best for her to have me there, as they were both still adjusting to their new life, and they had no support networks in England as yet. He was also working long hours in a hospital, and he worried my mother would become overwhelmed caring more or less single handedly for two very young children whilst still getting used to a new country.

And so, as fate would dictate, I was born in Ahmedabad, in a pol where my mother had lived until her marriage, called ‘Talia Ni Pol’. She remembers having more help with caring for my brother and me than she could have ever wished for. Everyone passed us around, and took turns in sharing the responsibility of entertaining my brother while my mother nursed me. The entire experience was, she tells me, a delight, despite her having two children under two to manage.

She had all her family, immediate and extended, close by, as well as numerous school friends and their families. She didn’t return to the UK until I was 10 months old, and my brother almost 2! The flight, she tells me was quite a challenge, with my brother running up and down the aisles constantly, but the sweet air stewardesses found him both a delight and a source of distraction from their duties. My father sacrificed this precious time with his growing family, but knew it was the right thing to do; he always talked of his sadness at missing my brother’s first birthday. He sent a box of full of toys and books to India for him to open on his birthday. We still have the teddy that he sent him, albeit threadbare and one- eyed now!

As I wandered around the streets, I was acutely aware of this being my heritage, the place of my birth, and the place my parents missed so dreadfully during their first years in England. The pols are so imbued with the memory of harmonious living, that I wondered why this could not still be the way the world lives. The pols certainly made life easier for all generations.

The original residents, such as my parents and their families, have long since moved away from the pols, and into the newer, more modern areas of the city, or indeed further afield. Many of the homes are in need of repair and renovation, although there are still some people living there. There is a great deal of activity though, with builders working on the most derelict houses first, and restoring them back to their former glory. That’s a positive thing for me, as amazing places such as these, with huge historical significance and beauty should never be allowed to disappear.