There is a Sanskrit word, its meaning imbued in Hindu philosophy, which can be understood and interpreted in modern life, known as Artha. It means purpose, goal, essence, sense, and also, the way in which one creates material wealth whilst also achieving one’s goals. Artha, along with Dharma (moral values) Kama (love, pleasure, psychological values) and Moksha (liberation, or spiritual values) are considered to be the four aims of human life.

I have always believed that material wealth can only truly fulfil us if it is attained by working through passionate purpose, and a sense of contributing to societal good, rather than solely for personal monetary gain. Sadly, we seem to increasingly experience a world where huge financial gains are achieved by very few, and where many people have neither work, nor enough to even have a basic existence, let alone work with passion. I am very aware that I am one of the fortunate ones.

I worked first in publishing, before setting up a recruitment consultancy which I ran with success for many years. After having my children, I became aware of an imbalance in my life, and longed for more spiritual fulfilment in my work, and once they were a little older, I found my calling. This was a passion and a skill that was always there, deep in my soul, longing for the propitious moment when it could be realised. That calling was Ayurveda, and the stars aligned to make it happen. I went back to university some 10 years ago and revelled in learning this amazing medicine system at a profoundly deep level. It awakened my hitherto sleeping senses, and I felt intoxicated by its ancient wisdom.

I love nothing more than seeing people doing things with passion. I know that here in the West, most of us have choice to follow a particular path, and that choice allows us time and space to make a difference (if we want to) both for ourselves and for others. I am so lucky to have been able to follow my path towards helping people to rebalance their holistic health. I meet many people who find equal joy in also doing what they love.

I recently made a new friend in Norfolk, who lives a short journey from my Suffolk home, where I increasingly come across the most friendly, sociable, interesting and creative people, all of whom seem to follow their passions in such diverse ways.

I was introduced to Joao, a Portuguese woman married to an Englishman, when I went to a mutual friend’s for supper. Joao and her husband live in a peaceful, old, rambling house full of family photographs and mementos, that they share (yes, really) with a family of peacocks! Joao’s former career was in social work, but after many happy years dedicated to her job, she eventually became disillusioned with an increasingly broken, demanding system, and decided to leave the profession some 13 years ago. 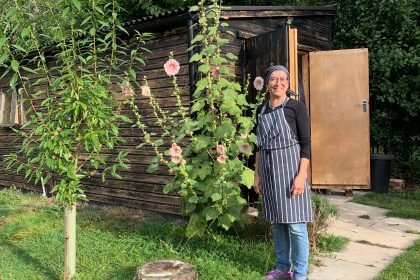 This was when one of her latent passions emerged. As a young girl growing up in Portugal, she had always loved the deliciously indulgent pasteis de nata  first made by monks in the Jeronimos monastery in Belem, a parish in Lisbon, and traditionally eaten for breakfast with coffee. On a whim, she decided to turn her passion into a small home -based business, and to bring a little bit of Portugal to her adopted home of Norfolk. She travelled to Lisbon to conduct some research, and visited the famous Pasteis de Belem cafe, which has been making thousands of these gorgeous, rich custard tart pastries a day, since 1837. Long queues are the norm at this once humble, now much loved and iconic establishment, but I am told it is well worth the wait.

However, their recipe, which came straight from the monastery, is top secret and although they could not reveal it, they offered to teach Joao the baking methods that produce confection perfection! She returned to Norfolk armed with the technique, and full of enthusiasm for her idea. Further training at the Lisboa patisserie in London’s Golborne Road cemented her skills, and she began making 60 natas a week in her loyal kitchen Rayburn, and sold them to a local farm shop. She was hooked, but felt a little restricted by lack of equipment and space, so a couple of years later, she thought about trying to expand. Amazingly, friends of hers who believed in her skill and her passion, lent her the money to invest in a commercial oven, which meant she was able to bake many more natas a week, and consequently supply more delicatessens and cafes, as well as sell at farmers markets. 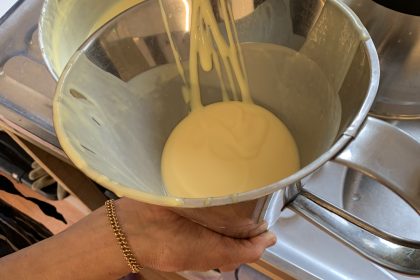 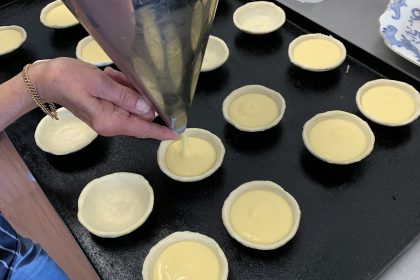 Three years ago, realising that her huge oven and her business were taking over her family kitchen, she bought a garden hut, and her husband and other family members worked tirelessly to insulate and fully fit it out for the sole purpose of making her Portuguese confections. She now sells weekly to a handful of loyal customers, most of whom have been ordering from her since she first began.

I recently had the pleasure of visiting Joao on ‘baking day’, which is a Friday. It was an early start, as she puts the final tray in the oven at 8.45am, and I wanted to see the whole process from start to finish. She makes the pastry mid week (she used to do this by hand, but now has a pastry rolling machine which is a godsend), the custard filling on a Thursday, and then puts it all together and bakes the natas by the trayful for exactly 8 minutes, in her faithful oven. Friday is also delivery day, and every other Saturday, she single handedly delivers and sells 120 natas at the gorgeous Wyken Vineyards farmers market. Unsurprisingly, they sell out in no time at all, with many regulars arriving early to join the queue for their weekly ‘fix’. 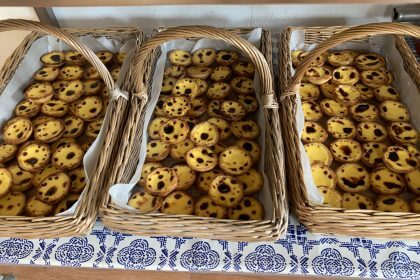 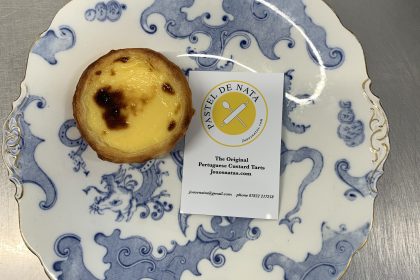 Joao is still incredibly passionate about her work, which is, even now, more of a hobby than a commercial venture, and she loves nothing more than being in the peace and quiet of her ‘nata hut’, a tiny world of her own that is far removed from the frenzy of modern life.

She delights in the compliments she gets for her natas, and told me the funny story of one man, a customer of a local cafe that sells her tarts, who asked her if she was ‘taken’ and if not, would she marry him. “I come here every week to eat these delicious natas, they’re the best ones I’ve ever tasted”, he told her. Although flattered by the rather strange but amusing request of marriage based on her culinary skills, she let him down gently, telling him she indeed did have a husband, but that she so appreciated his gesture.

“Does he treat you well?” he asked.

That, he said, made him happy.

Joao is the most amazingly warm, energetic, friendly and nurturing woman, who has followed her passion for years, fulfilling her need to feed people, to show her love to others through baking food that is part of her heritage, and whose artha has a ripple effect that benefits not only her, but many other people too. It was a gloriously bright summer’s morning when I visited, the peacocks were wandering around the garden, and I was struck by the beauty, the stillness and the sense of calm that she and her husband have created in their little bit of paradise in Norfolk. My experience that morning filled my heart with positivity and reenforced my feelings about the importance of one’s artha.

I am so happy to have shared time with Joao, and feel privileged to have made such a lovely new friend who has followed a passion that brings so much joy to her and many others.

Although she is busy supplying regular customers, Joao can make batches of natas to order, for special occasions. And what a special addition they will be.